Salisbury Mayor Jake Day, a member of the Maryland National Guard will be deploying on military leave. 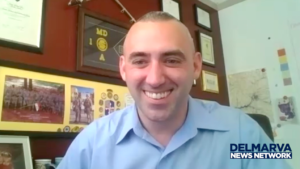 Mayor Day will be deployed to Africa for approximately a nine to ten months. He announced “I’ve been ordered to active duty beginning next week.”

The Mayor previously served in the U.S. Army National Guard as a First Lieutenant.

State of Delaware Issues Guidance for Return to School→