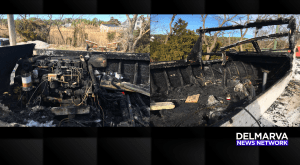 Firefighters responded to the Wingate Dock in the 2100 block of Wingate-Bishops Head Road in Wingate around 10:39 p.m. on Saturday for a reported boat fire. The 40′ x 12.5′ Deadrise Workboat was completely engulfed in flames. Crews primarily from the Lakes & Straits Fire Company worked for approximately 30 minutes to get the blaze under control.

The boat’s owner has been identified as Brandon Beville. While no injuries were reported, officials say the fire caused 70,000 dollars in damages. The fire was reported to have been caused by an incendiary in the after deck of the boat. Anyone with information on this incident is asked to contact the Maryland Fire Marshal’s Office in Salisbury at (410) 713-3780.